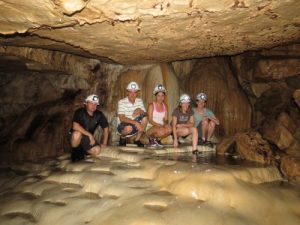 Venado caves are a unique underground adventure that allows you to explore the geography of Costa Rica from the inside. Caving (Spelunking) isn’t usually on many peoples list for their tropical adventure vacation to Costa Rica, but it should be. Located near La Fortuna, Arenal Volcano and Lake Arenal the caves are an easy addition to a day of exploring in Costa Rica.

The caves were formed in Limestone over 15 million years ago under sea level in the Miocene period. These caves were formed by ocean currents penetrating and passing through the limestone. The limestone formation was then later raised by tectonic movements. Much later the Guatuzos aborigines discovered the caves.

Caving Costa RicaThe caves boast more then just stalactites and stalagmites but also fossilized coral and other marine creatures fossils as well as rock formations carved by a still running underground river. While some of the caverns are as high as 20 feet others require you to crawl on your belly to wriggle through the complex network of deep tunnels to reach. The caves cover approximately a mile and a half and have ten distinctive rooms, called ‘Salas’ in Spanish. 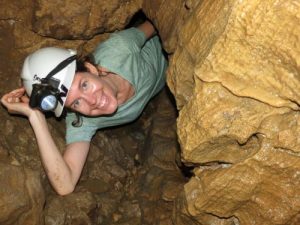 The underground adventure will also hopefully bring us across bats (four different species live here), spiders (some have developed very long feelers to help them in the complete darkness), crickets and other interesting insects that make these caves their homes.

With your hard hat, flashlight and a sense of adventure it is an exciting world just waiting to be discovered. Contact us today so that we can make sure an adventure in the Venado caves is part of your custom Costa Rica itinerary.