Costa Rica has at least 14 volcanoes within its tiny borders and most are an easy adventure to visit. Costa Rica’s volcanoes range in activity from continuous, to recently showing signs of activity to not having erupted for thousands of years. Each of Costa Rica’s volcanoes are beautiful in their own way and we would love to share with you their uniqueness during your Costa Rica Adventure Vacation. Listed below are a few of our favorite Volcano Explorations. 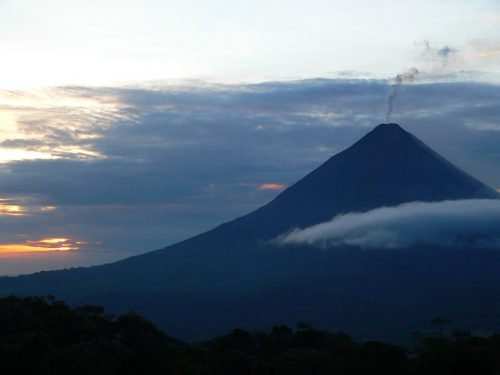 The Arenal Volcano (‘Volcan Arenal’ in Costa Rican Spanish) is the most popular volcano in Costa Rica and also the
countries most active. The Arenal Volcano has been active since 1968. Since the volcano is continuously spitting smoke and lava into the air no one is allowed anywhere near the craters. However, on a clear day or night, you don’t need to be too close to enjoy a spectacular light show of this regularly timid giant.

The town of La Fortuna sits at the northern base of the Arenal Volcano and Lake Arenal to the south. The area surrounding the volcano is full of great adventure activities such as canopy tours, hanging bridges, horseback rides and waterfall hikes that all offer an incredible view of the volcano.

The Irazu Volcano is Costa Rica’s highest volcano and sits just outside of the city of Cartago. This volcano hasn’t erupted since 1963 and the Parque Nacional Volcan Irazu protects the summit and craters. A winding road offers incredible views of Cartago, the Orosi Valley, the Turrialba Valley and the Turrialba Volcano as you make your ascent to the top. After parking we can walk out onto one crater to look out and on clear days see both the Caribbean to the east and Pacific Ocean to the west. On cloudier days we can gaze down into the alien looking craters that surround the main crater as well as across to the now smoking Turrialba Volcano. Being the highest volcano in Costa Rica the views from Irazu can’t be beat. 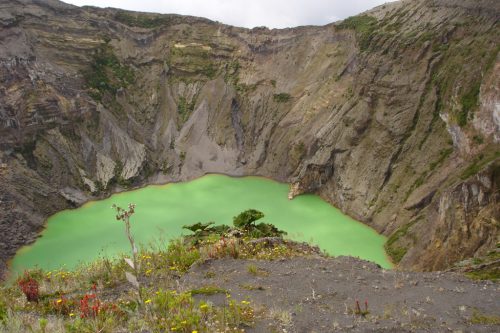 The offices of Green Frog Adventures sit at the base of the Turrialba Volcano so we get to enjoy this volcanoes splendor every day. Within the last year a lot of news has come out about this volcano as it started showing signs of activity. The volcano now regularly smokes from a few hissing fumaroles. The Parque Nacional Volcan Turrialba, which makes up the summit and surrounding area, now limits the time allowed to visit the rim of the main craters but the view from the top is spectacular. We can either hike or drive (though its not much of road and more of a 4×4 adventure) to the summit. This volcano hasn’t been ‘discovered’ yet by the main tourist companies so it’s a less crowded activity, but visiting the Turrialba Volcano is definitely an adventure.

Sitting just outside the capital city of San Jose the Poas Volcano National Park is one of the most visited protected areas in Costa Rica. This picturesque volcano has the stereotypical rainforest surrounding it giving way to a tourists imagination of what a volcano in the tropics would look like. On top you will find deep craters bubbling and boiling with sulphurous gases. Although the volcano has had only minimal activity in the last fifty years its past is colorful with eruptions and explosions. In fact the Poas Volcano has the reputation as the world’s largest geyser and evidence of the volcano’s past is visible all around you.